I love going to garage sales. I love finding bargains. And I love recycling. So is it any wonder that half of the inn is decorated with transformed treasures?

I also have a thing for old picture frames. There are still boxes and drawers of them in the basement, some in pieces, that I will find a purpose for some day. Finding an entire collection of small frames at a sale allowed me to display many of our old family photos in the hallway upstairs for just pennies on the dollar of what the new cost would have been. These were used just as they were. 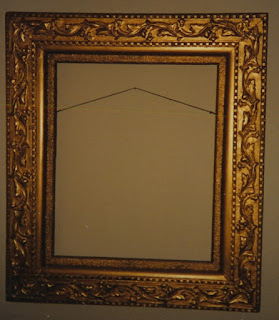 But some of the old things I drug home needed some help.  This next one came as a package deal with two  good looking ones I wanted.  It, along with all sorts of decor, lined the walls of my computer area in Dallas (for lack of a better place to store them until the move here.)

One day,while leaning back and contemplating something, I got to staring at the lines on this old guy and realized there where little squares and dots around the edge.

Nancy's Room was already heading towards a Mary Engelbreit theme with lots of black and white checks.  Maybe some bold paint choices were in order. 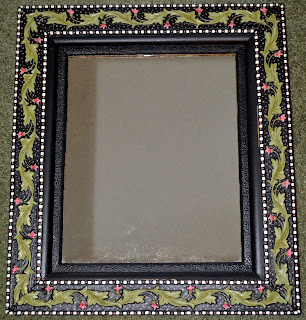 This went through several trial runs before I settled on something I liked.  At one point, the inside nubby rim was bright pink and the second layer had black and white stripes. 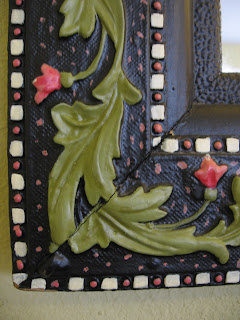 Each time I would just paint it all black again and start over.  When I was happy with the look, I spray painted a clear finish over the whole thing and took it in to have a piece of mirror cut to size.

Another absolutely horrible frame came to me by way of some old hotel that was selling off interior decor in a remodeling.  I don't have the before picture but just imagine an old very dark frame around a picture of "The Conquistador"...very popular in the early sixties. Needing something light and cheerful for a mirror in Hattie's Room, I started with a white base and played around with some semi-transparent stencil paints that I purchased by mistake (don't you just love those mistakes!)  I rubbed some blue into the carving on the inside rim and most of the paint off the flowers and leaves. Now I have a custom piece that is perfect. 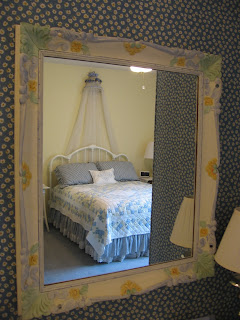 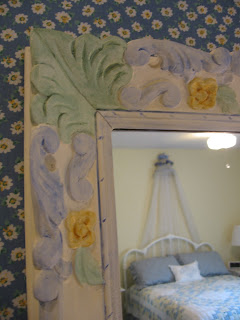 So don't be afraid to play around.  Even if you don't need the frame for a picture, consider using it for a mirror...in a bathroom 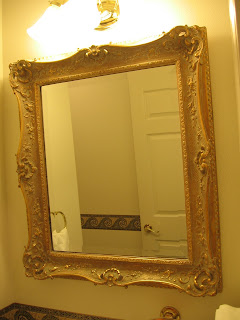 Peaking out from behind and reflecting foliage... 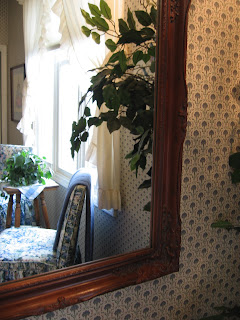 Or interspersed with old pictures... 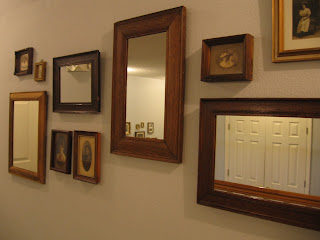 Posted by The Stuff Closet at 2:35 PM 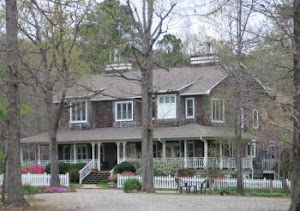